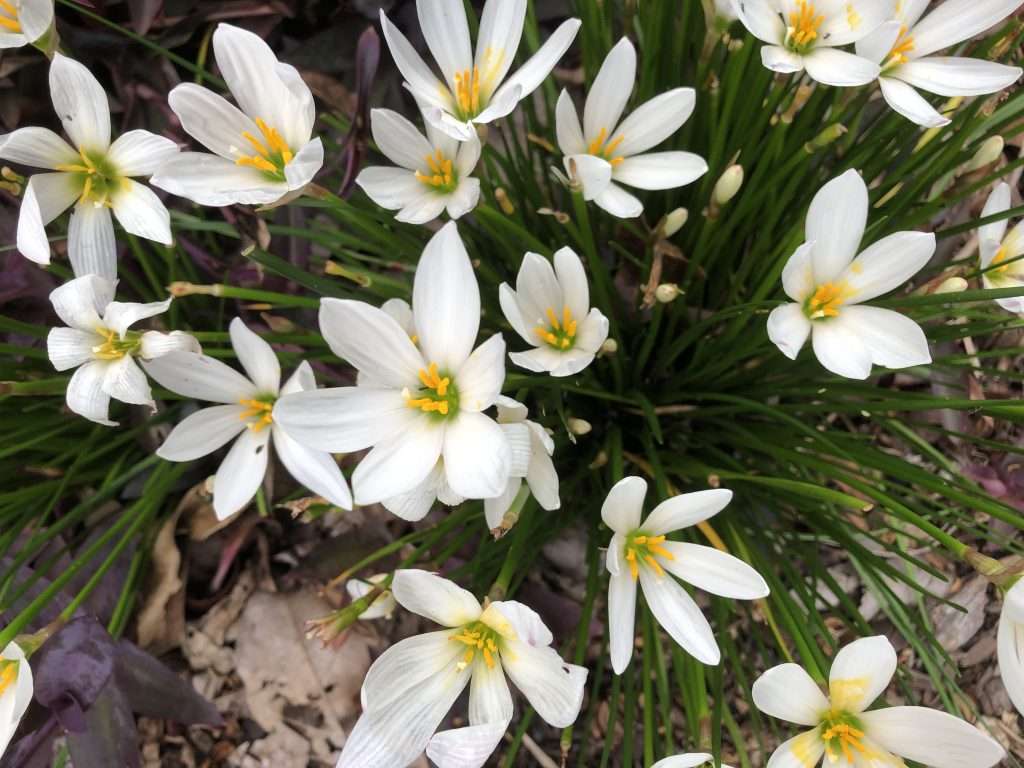 Brisbane has just had massive flooding. Like the proverbial Noah’s Ark flood it has appeared to rain for forty days and nights. While out walking, in the midst of destruction and washouts I came across a patch of rain lilies. Hope and new life will always win over tyranny and hatred.

Few readers of this blog would have ever met my wonderful mother Zena. I suppose most of us say our mothers were extraordinary: I just joined that queue. Growing up in a small country town far away from the city Mum developed a love of learning. More importantly she developed a love of life.

At the age of thirteen, given there was no secondary school in our small home town of Proserpine, Zena travelled by train to Bowen and then by coastal steamer to Sydney via Brisbane and then by train again to the Ursuline Sisters boarding school in Armidale: a journey of almost 3000 km. Those Ursuline Sisters must have been extraordinary for the woman I grew to love and admire as a child was educated, liberated, wise and loving. Zena, my warrior princess, was her own person, thought outside the square and made a difference. Mum was a woman of the world who travelled extensively in the 1930’s and 1940’s: a governess in the highlands of PNG, a Sydney based supporter of far flung missionary priests throughout the Pacific, a graduate of Sydney University and a woman who turned her back on a proposal for marriage because the potential husband’s family felt it was below his station in life to marry the daughter of a grocer! Yes, that’s my Mum.

On the day she died aged 94 Zena mirrored though word and action every other day that I knew her. The staff at the nursing home got her up early and showered her; she expressed her gratitude. She enjoyed a good breakfast and would never cut the fat off the bacon for “you only live once!” She penned six letters to friends living overseas for that day – November 28th – was the last day that you could be assured her friends would receive the mail in time for Christmas. She attended a concert up in the dining room and sang and clapped along to the old war time songs she knew and loved. As the nursing staff helped her into bed for her afternoon siesta she was once again – as she always was – grateful “for your kindness!” When the staff came to help her into her chair mid-afternoon she simply said, “Nurse I’m feeling funny inside!” Within minutes she had gently passed to her God she had loved all her life.

Why do I share some of Zena’s story? Well because Mum did not have an easy life. As I have mentioned before my dad fought ill-health most of his life. In particular Dad fought mental illness in the form of paranoia and schizophrenia. Mum nursed dad. Mum was gentle with dad. Mum cut him slack and built a home around him and their three sons. Yet, despite all of this pain, and there were many times when it must have been so tough for her, I never ever saw Mum feel sorry for herself or get depressed. I have often wondered what was Zena’s secret to balance and mental health in the face of so much pain and pressure?

I ask this because individually and collectively we have had a difficult couple of years. Covid 19, Afghanistan, Climate change, politicians lacking credibility, drought and now flood, and now the evil which is Putin’s attack on the Ukraine! So much pain. Like a band aid continually ripped off a healing wound before it has healed, it could easily feel that we lurch from one difficult time to another.

So what did Zena by her example, teach me about balance and gaining a sparkle in the eye?

a. Nature: Get your hands dirty in nature or with animals. Zena loved her garden and her pets. She had pet green frogs in vases, her two faithful terriers – Basil and Bailey, her maiden hair fern and her South Africa violets. She knew the seasons of the garden, when the Ulysses butterfly would appear, when to prune the Lagerstroemia (Crape Myrtle), what the appearance of flying ants meant and whether or not we would get a good mango crop.

b. Music and Art: Mum was no Dame Nellie Melba but she would iron singing along with Bing Crosby on the vinyl records or in her later years, anything Irish played by my nephews on their I-Phones. Beyond stick painting Zena was challenged in the field of art but the walls of her home were always covered with prints or paintings.

c. Laugh: Zena could laugh at you, with you and at herself. One time when she had been teasing me I retorted, “I thought mothers were supposed to be nice!” Her straight back at me reply, “Oh dear they never taught us that book at Armidale!” When dad, a notoriously slow driver got a speeding ticket for doing 20 Km in the 10 km an hour zone inside the rubbish dump Mum belly laughed that story into family folklore and she would have tears running down her cheeks as she laughed at Onslow in Keeping up Appearances (I think she had a crush on him).

d. Spirituality: A woman of deep and practical faith – Mum’s spirituality framed her life. But her faith was not about rules and regulations, the Church was not an end in itself and she took the Second Vatican Council seriously, “We are the Church!” And for Zena that Church was welcoming, accepting, giving, forgiving and healing. Her spirituality gave her life, its joys and its struggle, meaning!

e. Humility: It was never about her. Zena was at home with Kings or paupers, Prime Ministers or chimney sweepers – it did not matter. Mum saw the person: not the label or the bank balance. One time when the Governor of Queensland (Leneen Forde) was visiting our small town and an official welcome function was put on. Zena (uninvited) shuffled her way through the crowd to “have a chat” as “her husband Gerald and I had been friends back in Canada!”

f. Kindness: Zena was a giver. But not a martyr giver – but a cheerful one. I have lost count of the number of bottles of mango chutney Zena made and gave to “poor old Mrs Gray” and a hundred like her who might be lonely or lost a loved one or the nursing home visits to sit with someone with no other visitors. Many a morning was spent on the phone to some “poor old dear” who needed “cheering up!” I never had the courage to tell Mum that the “poor old dear” was actually younger than she.

g. Story: Zena loved stories – hearing story, telling story, laughing at story – being story. Many a family gathering under the mango trees – beer or cups of tea – but always endless stories. And the stories were about people; always people before things. Name any date in the calendar year and Zena would link that date with a birth, a death, a marriage, an anniversary of something special in someone’s life.

h. Compassion: Along with her kindness, Zena had an extraordinarily compassionate heart. She was drawn to those doing it tough. Her heart soaked up so much of dad’s pain. She was simply there for you and for anyone who was hurting.

i. Exercise: I don’t think I ever saw Zena run or jump or go to the gym but she loved the fresh air, she loved a day’s work in the garden and she walked many a marathon in service of others.

j. Live in the now: Mum never read, ‘Eckhart Tolle and the Power of Now’ but she could have written it. Zena had every excuse to regret the past (she lost her dearly beloved brother Joe in the Second World War, we were never wealthy and dad’s poor health was a constant pressure) but she never did. Zena could have wished her days away hoping for a better future. Instead, Zena lived in the now. She was deeply present to all whom she met, she loved simple things, delighted in the ordinary and got a good night’s sleep!

In all of this Zena claimed her voice. She was true to herself. She marched to her own drum. All of this and more gave her life and gave her balance in the midst of life’s pain.

There is a thunderstorm in Brisbane tonight as I write. It is probably Zena saying, “Oh Damien, you do rave on! And you DO exaggerate!” Zena would be the first to admit her mistakes, but she would not dwell upon them. She knew her “feet of clay” – in fact it was Zena who first introduced me to the phase. But all of the above gave Mum a balance and a mental health that was ordinary but extraordinary.

I am a slow learner. I had a poor mental health time in 2019 with much anxiety and loss of confidence but the two and a half years since then have been extraordinary. I think I am beginning to learn probably the most important lesson my mother ever taught me!

What are YOUR versions of Zena’s ten commandments for healthy living. Each of you will do your thing in your way – Zena would have it no other way. At the end of the day, these simple things helped Mum keep it all in perspective, gave her hope and courage, gifted her with compassion and most of all – a sparkle in the eye!