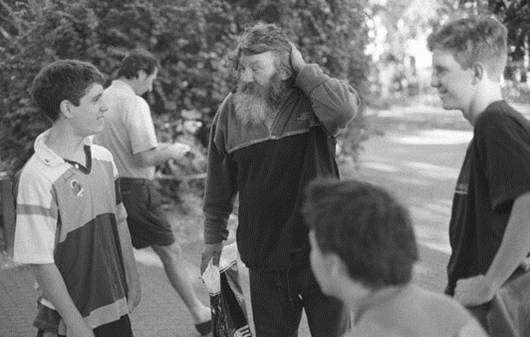 It was a rainy Brisbane Summer’s night: a Friday. Rainy really isn’t the right word. It was bucketing down and Damien was in one of his grumpy moods. I was rostered to go out on Eddie’s Van that night with a team of 16 year old boys from the school. I just wanted to go home, snuggle up with a cup of tea and watch a Friday night movie.

Eddie’s Van was and is the hospitality van that the school conducted to provide a sense of community with the homeless of the inner city and to build reciprocal and respect filled relationships between the students and the wonderful people who called the streets and parks of the inner city their home. We had been operating this service for many years and we knew the homeless well and they knew us. But never the less, it was a Friday night and I was tired and grumpy and the rain was bucketing down and I just wanted to go home.

When I turned up at the place where we prepared the van it was a hive of activity. The six young men were busy getting the coffee, tea and soup out, the biscuits, milk and sugar were all packed into the back of the van and the water in the urn was almost at the boil. “Fellas, lets not go out tonight, it is bucketing down rain and there just won’t be anyone there – we are wasting our time!” says, Br Damien. “Sir, we have to go out!” responds the boys. “Why?” asks the grumpy Damien. “We told them we would be there Sir!”

So with smoke coming out the ears I drove the motley team down to the city centre with the windscreen wipers working overtime. When we arrived I pulled up next to a small shelter close by the overhang of a larger building: we would serve the coffee, soup and tea from the shelter and the homeless would then take shelter beneath the overhang. I had hardly run around to the back of the van to open the back door before zoom, zoom, zoom – homeless men (and some women) came from everywhere in the driving rain. The shelter was crowded as the boys mingled, greeting the homeless by name, sharing story and anecdote all the while Br Damien was fuming.

As the rain slowly slowed to just ‘light rain’ a drenched Damien heard one of the most profound things of his teaching career. One homeless guy sheltering from the rain turned to another and said,

“See, I told you they would come!”

The words struck me like a lightening bolt. “See, I told you they would come!” If it had been up to Damien we would not have come!

I looked around at the crowd of about 40 people – mostly crowded around under the overhand of the office building on the footpath. Cups of coffee and tea, cups of soup, biscuits in hand but most of all laughter, story shared and a sense of community and belonging.

It was about story. It was about relationship. But most of all it was about fidelity! These beautiful but fragile people had been let down too often. These beautiful but fragile people had had too many people say but not deliver, deliver well meaning platitude but not presence. It was the ‘turning up’ on a rainy night that mattered. It was the fidelity. It was that deeply felt sense of “Yes” when those too often let down eyes saw the van come around the corner driven by a monk who would have preferred to be home with his cup of tea.

“See, I told you they would come!”

In your life and mine perhaps one of the greatest gifts we can give to another – and one that is too often unsung, not honoured and not named – is our fidelity! This fidelity says to the fragile heart, “You are loved!” And the fragile heart hears it – not with the ears but with the heart.

As the Little Prince says, “It is only with the heart that one can see rightly – what is essential is invisibl

previousJust a jersey
nextR U Ok